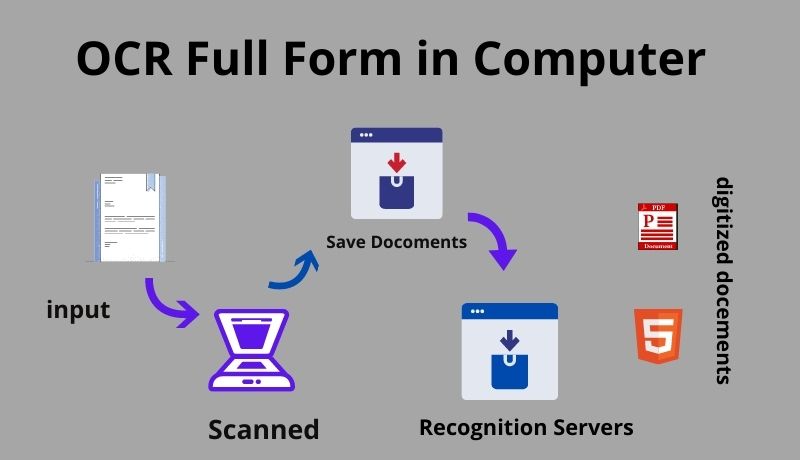 What is the OCR Full Form in Computer

The optical character reader is used in scanning documents, it has been designed to convert scanned documents or the Image can be read in electronic version with text.

For Example, if we can scan any photo or paper documents in a printer. So the printer creates a file with a digital image in it. The file can be in the form of JPG, PNG, PDF. But the new file is still only an image of the original documents. So we can load these scanned electronic documents created that contain the image into the OCR program. So the OCR program recognizes the text and converts the document as readable.

The scanned page can be displayed on a screen we can read easily. OCR the text of scanned documents translates the character into code which makes the text machine-readable.

These documents can be transformed in the form of soft copies.it can be created by a word processor, so the user can format and edit Search and Read.it also helps computers in many ways it recognizes on a scanned page by using because of optical properties of words and character on the scanned document.

An OCR is a device that is made up of two things, Hardware as well as software. Which converts the document files or documents into readable text. In OCR the hardware, copies and reads the text and software which dealing with processing and is also used in artificial intelligence and intelligent character recognition.

So OCR software have Various techniques but Basically, it analyzes one character and word of text at a time it identifies character with help of two algorithms. There are the following two algorithms.

b) Feature Detection: It is the technique, the OCR program believes the features of Characters or digits or numbers. The feature may be included the number of angled lines, crossed lines, or curves in a character. For Example, the letter A may be stored two lines are attached or connected at a center and also joined at the end.